A common misconception about Florida is that because of our wonderfully warm weather, the entire state closes around the middle of April, and everyone goes home. The reality of our weather is that it’s almost always warm and delightful, and millions of people enjoy living here all year. Since we are so close to the tropics, our weather is more “regulated.” It is warmer in the winter than areas to the north, but humidity aside, somewhat cooler than areas to the north during the summer. The highest recorded temperature at Miami International Airport was only 100 degrees. 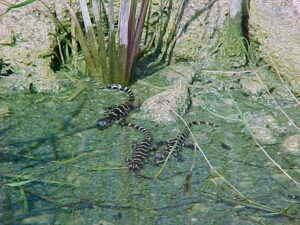 Alligators hatch in August and September.

You’ll also find that the Everglades are different in summer than in winter. Even though our changes of seasons don’t involve falling leaves and snow, we do have seasons that bring different wildlife and different river levels. Because summer is Florida’s off-season, you’ll find the crowds smaller, so this is a great time to enjoy a more intimate Everglades National Park Experience.

No matter which season you come, you’ll find that an Everglades tour at Shark Valley is an unforgettable experience that you’ll be eager to repeat.